Churston Builders, The Torbay and South Hams Builder, were employed to build an extension with gable windows on this bungalow in Churston Ferrers in July 2017.

Our customer wanted a single-storey extension to provide a dining room and relaxation area that could extend outside in good weather. To create a seamless effect the entire gable end would be glazed from floor to roof with full width opening bi-fold doors with hi-spec glazed units to minimise heat loss.

Our first task was to remove an existing conservatory. The internal double-glazed doors were left in place to secure the site whilst the exterior work progressed to a time where it could be secured. Footings were dug and poured and the structure began to take shape with double-leaf of blocks tied together and sandwiching 2 inch rigid insulation. Once the structural walls had reached roofline the ridge was established and roof timbers fitted. At this point the exposed timber structure that would support the gable were installed.

Work could now begin on tiling the roof and tying in the the existing roof structure. Once complete, floor joists and rigid insulation went down and the windows and bifold doors were installed to make the building secure. The open roof space was insulated with Rockwool and plasterboard and then the internal walls were plastered. Meanwhile first fix electrics went in and outside the roof was completed with soffits and guttering and walls were rendered.

Stage 2 of the project was to complete the internal integration of the new space by removing the old conservatory access and refinishing what was the original gable wall to an interior standard. This now led directly into the kitchen via a clear double width access.

On to stage 3, which was to build a raised veranda area around the entire extension which would be finished with worn limestone effect paving to provide the extension of the dining area. Footings were dug and poured and a block wall laid at the extent of the structure. The void was backfilled and stabilised then the paving laid with an edging course parallel to the retaining wall. finally the wall was rendered and decorated to match the property and a set of steps down to the lawn were added.

We were really pleased with the outcome of this project especially how light and airy the new space was. 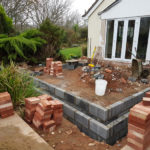 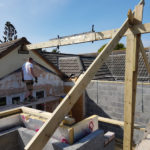 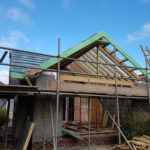 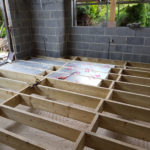 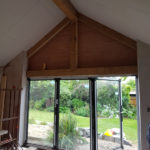 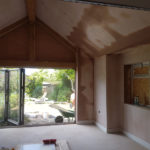 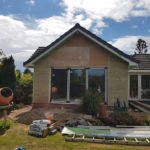 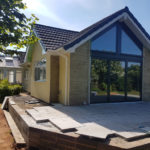 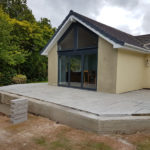 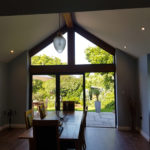 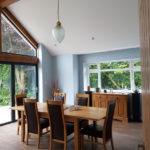 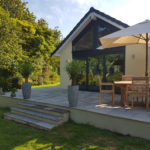 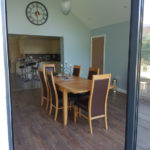 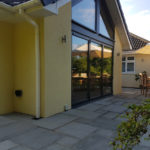 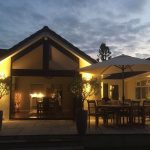 Rear extension sunroom. Before and after photos

Extension & roof terrace Before and after picture